Is it just us or are you also addicted to Chris’ Marketplace crab cakes? We caught up with Chris, owner and founder of Chris’ Marketplace, to learn how he got started in the business. The story of how his crab cakes came to be is the stuff of legend!

After living throughout the United States for work, in 1992 Chris moved back to the DC area because he saw the importance and the potential of the local fish. Upon his arrival back to DC, he went over to a friend’s house for a crab feast where they found themselves with an abundance of extra crabs! Chris took home the remaining crabs and began picking the meat. He stuck the pile of meat in the fridge for the night and went to sleep.

The next morning, when reaching for milk for his coffee, he knocked over his secret sauce onto the plate of crab meat. Chris developed his secret sauce while he was captaining longline boats for swordfish and tuna, in between undergraduate and graduate school. While working the overnight shift, Chris used to baste his fish in his secret sauce, and he continued making the sauce long after his arrival back on land. With the combination of his secret sauce and the flavor and delicacy of the crab meat —VOILA— Chris’ crab cakes were born! He microwaved the meat with the secret sauce and devoured the entire plate for breakfast.

Following this happy accident, Chris said: “A light went on in my brain: ‘crab cakes.’ I quickly developed my recipe by using lots of crab meat, a little sauce for seasoning, and a little whole wheat cracker in each cake. It took me maybe two or three days to finalize the recipe.”

Excited about his new delicious recipe, Chris called the Japanese embassy after reading an article in The Washington Post food section on embassy foods and how difficult it was to get products into embassies. Starting at what he thought was the most difficult embassy to get products into, his call was transferred directly to the executive chef.

After introducing himself, Chris immediately asked if the chef liked crab meat. The chef responded ‘yes’ and Chris asked if he would be able to bring a sample of crab cakes the next day. The chef responded with a green light. The day after Chris dropped the cakes off, he had his first order for 200 jumbo lump crab cakes. From there, Chris began weaving his way into embassies across the city and into people’s homes.

As Chris’s business began to grow and started to take on employees, he prioritized providing opportunities for women and refugees that were and are currently seeking jobs. 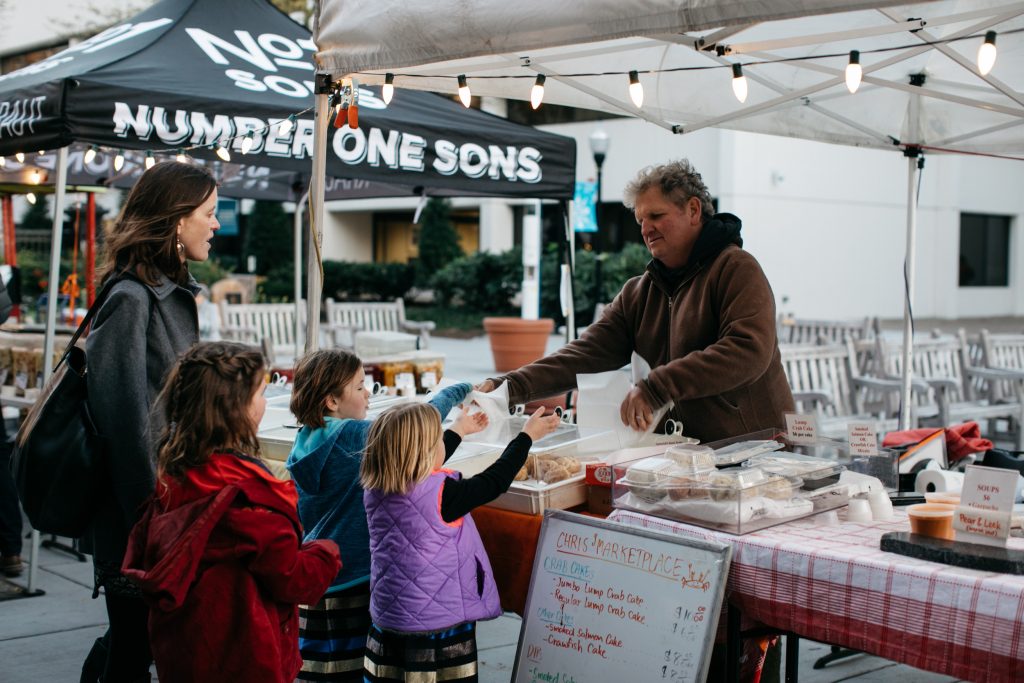 When asked why his crab cakes are so good, Chris told us: “A renowned food critic once told me, ‘your food is your truth.’ I asked what the critic meant by that and they said, ‘everything I have ever tasted that you make is exactly what it should taste like, there is no BS in anything.'”  Chris says the flavor of his crab cakes is where it is today because he listened to what the people wanted.

Chris has used the same local Maryland processer since he began his business and has always sourced his crabs locally in the waterways closest to us.

For people new to crab cakes, Chris suggests pairing them with fresh corn, avocado, and coleslaw. “The natural sugar in corn combined with the buttery creamy flavor of avocado really brings out the richness of Maryland Blue crab,” he explained. “With the additional textures of the shredded cabbage in the coleslaw, the flakiness and butteriness of the crab cakes shine through.”

When storing Chris’ Marketplace crab cakes, they will keep in the fridge for four to five days. The crab cakes may also be frozen if they are wrapped tightly in plastic. If frozen, thaw in the fridge, then brown them under the broiler the way one normally would prepare a crab cake!

Find Chris, and his delicious crab cakes, at Dupont Circle every Sunday! In the spring, look out for Chris’ Marketplace at Downtown Silver Spring, Foggy Bottom, and By the White House markets. 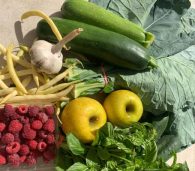 Click here and learn how to make summer squash your new best friend! 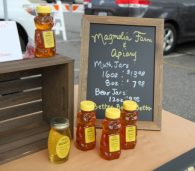 Celebrating Pollinator Week Throughout the Year

June 20-26, 2022 is Pollinator Week - an annual event celebrated internationally. Desi Crouther, owner of Magnolia Farm & Apiary, shares how Pollinator Week raises the awareness of pollinator importance and health and provides an opportunity to become better informed about what we can do to protect pollinators throughout the year.

Join the Celebration!
no thanks