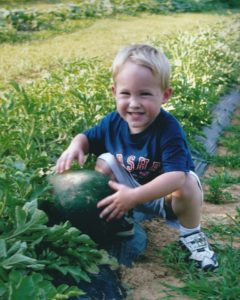 Derek Lewis Kilmer, owner of Kilmer’s Farm Market has a rich family history that afforded him the opportunity to bring fruit growing and selling into the 21st century. While Derek’s great grandfather was a farmer, dairy man and small fruit grower, it was his grandfather, Charles W. Lewis who is acknowledged for his legacy of professional, dedicated, and superior fruit growing.

At the time of his death in 1986, Charles and his wife Wanda continued ownership, and operations of 500 acres in Orchard Estates. Wanda’s daughter (Derek’s mom), Carolyn Lewis Kilmer acted as manager of the orchard; taking ownership of the packing, and storage area of the business. Derek’s father, John Kilmer continued wholesale of the packed peaches, and apples.

Derek returned from college to the family farm in 2003, and began finding his niche by opening the “little red barn “farmers market. He expanded by opening a second location in a neighboring county, and by participating in the Washington DC metro area farmers market. In 2007, he began delivering apples to schools in Jefferson County WV. At first, Derek was hesitant to take on this additional responsibility, but the closing of the highway in front of his market pushed him to end his retail business, and try something new. What Derek did not know is that he would be hitting an industry trend at the exact right time.

In 2008, things like “Farm to School “, “Farm to Institution “and “Farm to Table” started to become popular, and the” Local Food” movement began. During the next 8 years, Derek would see dramatic growth in sales, and he would expand the family farm by growing fruits and vegetables other than the traditional peaches and apples of the past. Derek’s parents retired in 2012, leaving him the opportunity for the transition into a broader scope of the industry. Today, Kilmer’s services schools in 10 different counties in WV, 2 counties in VA, numerous charter schools in the DC Metro area, both non-profit and for profit organizations in the DC Metro, and the Martinsburg Veterans Administration Hospital.

Kilmer’s maintains a community outreach by donations of produce to children’s programs in school, and the classroom, local food banks, and various other charities.