To celebrate our 25th anniversary, we will be sharing stories from our community of farmers, producers, FoodPrints teachers and students, shoppers, gleaners, and beyond about FRESHFARM. We’re starting by checking in with one of our founding farms, New Morning Farm, who was there when it all started with the opening of the Dupont Circle farmers market in 1997.

FRESHFARM now runs the third-largest network of farmers markets in the country, but we started small. In 1996, co-founders Bernadine Prince and Ann Harvey Yonkers launched FRESHFARM as a public education program of the American Farmland Trust, and the next year they opened the Dupont Circle farmers market in Washington, DC, with 15 farmers from four states selling fruits, vegetables, flowers, and plants.

Of that original farmer cohort, a handful are still at Dupont to this day 25 years later, including New Morning Farm (Hustontown, PA), which was founded by Jim and Moie Kimball Crawford in 1976. The farm is now owned and operated by longtime New Morning Farm employee, Jenni Glenister.

“I remember it really clearly, it looked good to me from the beginning,” recalls Jim of the opening day of Dupont Circle. “I remember it being a sell-out, those first two weeks we were in the strawberry and peas season, and it looked like a great location and a great idea. There were a lot of people out right away. I wasn’t that surprised because the plan sounded really good and Bernie and Ann were just wonderful. We got to be very good friends with them over the years.”

The Thrill of Local Food

The heart of the New Morning Farm business model has always been selling their organic produce directly to shoppers. Jim explains that as a child growing up in Boston, a farmer would come into town on a house-to-house route selling products that he grew. “He’d come every Friday afternoon and my mother was a good customer. I was six or eight years old and I was completely entranced by this guy and his food.”

Gardening became a passion for Jim, and in 1972 he decided to take a leave of absence from his DC office job and give farming a try. “I immediately thought back to this guy who used to come by my house when I was a kid and I thought, that’s the model I want to follow in Washington, DC. In other words, the producer-only farmers market model or the idea of growing something in the country and bringing it to the city, which is really fundamental to me. I really believed it when I started because it thrilled me so much as a kid. As soon as I started selling my produce, it was really obvious that everyone was just as thrilled as I was about this idea.”

In the nearly 25 years since Ann and Bernie rang that first opening bell at Dupont Circle, a lot has changed, but Jim believes the joyful connection forged between urban and rural communities through food remains a constant. “It’s a fundamental human nature sort of thing: if you live in a city you want to have a connection with food that is grown nearby you in the country. I grew up with that,” he explains. New Morning Farm has passed onto the next generation of farmers and the Crawfords have officially retired, but the couple remains involved with the farm. Moie spends a few days a week at the farm getting things organized for market, and you’ll still find Jim at Sheridan School farmstand selling organic produce and connecting with Washingtonians — farmer and customer continuing to share the thrill of local food. 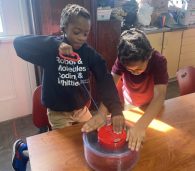 In FRESHFARM’s FoodPrints program, students’ opportunities for new experiences range from using a potato masher, to trying a salad spinner for the first time, to sharing a meal you cooked with your classmates. All of these experiences provide a safe exploratory environment for meaningful collaboration between students toward a shared end goal: making a delicious and nutritious meal or snack. 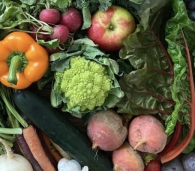 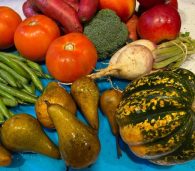 November 29 is Giving Tuesday! With your generous donations, we can continue finding innovative ways to solve critical problems across our regional food system to build a more equitable, resilient, and sustainable food future. Help us reach our goal of $16,000!

Donate for Giving Tuesday
not at this time