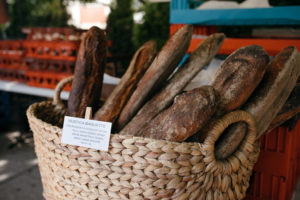 Chef Jonathan of Seylou Bakery ventured on an unforgettable journey to Senegal to study West African drumming. The following year he returned, ending up in a far-flung desert village where he made a deep connection and formed lifelong friendships with the locals, who helped him develop a new perspective on his life. Oftentimes in the late afternoon he would notice a majestic bird flying overhead, as if keeping him company. When he asked the village chief for the name of this beautiful bird, he was told its name was seylou.

Seylou is a wholegrain bakery that strives to produce the most delicious baked goods using slow, time honored techniques and 100% whole, fresh-milled flour that is sourced locally. In addition to much deserved national and local buzz for its Pain Au Levain, Seylou was announced as America’s Best Loaf by The World Bread Awards USA in 2019.

November 29 is Giving Tuesday! With your generous donations, we can continue finding innovative ways to solve critical problems across our regional food system to build a more equitable, resilient, and sustainable food future. Help us reach our goal of $16,000!

Donate for Giving Tuesday
not at this time