The 38 acres of Country Pleasures have been in agricultural production for more than 200 years. The farm was a grain and cattle operation, owned and operated by the same family until 1985. In that year, Eric Rice purchased the Middletown, MD, farm in an attempt to create a model ex-urban farm that would be economically viable and environmentally responsible in the face of the exploding real estate development in the greater Baltimore/Washington area. Eric is one of the founders of the Maryland Organic Food and Farming Association, and Country Pleasures was the first to grow certified-organic beef, as well as the first certified-organic orchard, in the state. Country Pleasures Farm also has hired a large number of interns, many of whom have gone on to become either successful farmers or to other types of professional work in sustainable living. Eric and his partner, Lori, bring the farm’s meat, vegetables, fruits and flowers, as well as an array value-added products such as handmade fruit preserves, syrups, salsas, baked goods, pestos and body-care products made from the bounty of their farm, to market. 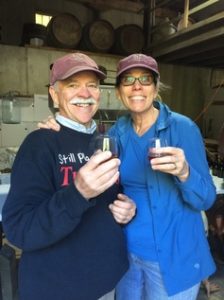